We are studying Matthew 5:1-12 for Sunday, June 30 – the familiar “Beatitudes,” or as I’ve heard some people call them, the “Be – Attitudes,” which begin the Sermon on the Mount. Here are a few notes on the text:

BACKGROUND AND CONTEXT: We are back in Matthew’s gospel, at the beginning of the Sermon on the Mount. This is the first of the several longer “teaching discourses” that are part of the structure of the gospel. This is probably the most famous one, too. It seems to gather together many separate Jesus sayings, and has been one of the grounds for the theory that Matthew was working with a couple of literary sources: the gospel of Mark, and a collection of Jesus’ sayings, the hypothesized “Q” source. In any event, Christians have been attributing these sayings/teachings to Jesus for a long time.

As Matthew frames the event, Jesus delivers this teaching on a mountain, which is probably meant to make us think of Moses on Mt. Sinai, with all the connotations of the “giving of the law” and the “making of the covenant” that has, so that it frames Jesus in that light and gives this Sermon on the Mount that degree of seriousness and community-forming authority.

Our text, Jesus’ list of categories of people who are “blessed” (the meaning of “beatitude,” anglicized Latin for “blessedness”), introduces the whole teaching.

It used to be common for us to read these beatitudes as something like instructions. Since these are the kind of people who are blessed, we ought to go out and be like this (poor in spirit, meek, etc. etc.) and so on.

Since Dallas Willard, and The Divine Conspiracy, that reading has become a lot less common, and for good reason. Willard points out that the list of categories in Jesus’ sayings here are categories of people that no one would normally want to be, because no one would normally think of them as “blessed.” In fact, it’s a list of people who are, from the perspective of our normal understanding of blessedness, obviously NOT blessed in that first century world – and, for that matter, in our twenty-first century world. Who wants to be mourning? Who wants to be persecuted?

CLOSER READING: It is worth noting that Jesus sits himself down in v1; the Greek word there is the ordinary word for being seated that, because of the history of the church, has given us our word for cathedral – a place where a bishop sits in a seat, a cathedra – like, to teach. That is, there’s an echo of church tradition, whether already or still to come, in this language.

Verse 2 is literally “Opening his mouth he taught them, saying …”, which no doubt means what we mean when we say “he started talking,” but feels a little different – more concrete, at the very least.

So the first thing Jesus does here is issue a series of statements, that are very short and repetitive, like a litany or a poem; they each start with the Greek word makarioi, which means blessed or happy or fortunate. For us, because “blessed” has become church language, it might help to substitute the more familiar word “happy” and see how it makes us feel. “Happy are the poor.” “Happy are the mourners.” That might help us get closer to the counter-intuitive feel of these statements.

On Willard’s reading, what Jesus is doing here is saying something like “you think these people are losers. If you’re one of these people, you probably feel like a loser. But the kingdom of the heavens is open to these people, and that’s real blessedness.”

It is easy to see how it would sound strange to say that you are “happy” if you are poor, even in spirit, which might mean something like … being dispirited … when we begin to think about this.

Similarly, those who mourn, the meek, those who hunger and thirst for justice – namely, those who have been so deeply wronged that they are starving for justice – and those who are persecuted and reviled and falsely accused of evil are not obvious candidates for “happiness” in our world. We don’t have to work to notice this, if we just notice it.

It less obvious how verses 7-9, the merciful, the pure in heart, and the peacemakers, are counter-intuitive categories.

For that, we might need to think about the kind of concrete social situations in which people would get these labels.

About how people who are “merciful” are likely to be the kind of people who are always getting taken advantage of and having people walk all over them, because they say “Oh, that’s OK …” and don’t like to impose consequences for bad behavior on their overbearing kids and parents and bosses …

About how people who are “peacemakers” are likely to be the kind of people that get called “sell-outs” and “traitors” and “useful idiots” and “chumps” by people who want to keep fighting the opposition, right up until the achievement of a negotiated settlement, or even after that … in any event, they will not be called “victors” or “conquerors” – and in the first century, and perhaps still in the twenty-first, we tend to think of “victors” and “conquerors” as the happy and popular ones.

The repetitive form of these short statements produces a definite, poetic, almost hypnotic or other-worldly effect on the reader or listener.

The use of “theirs is the kingdom of heaven” (literally, the kingdom of “the heavens”) in verses 3 and 10 creates a kind of envelope, which might make us want to read the other descriptions (being comforted, inheriting the earth, being filled, etc.) as properties of this kingdom of the heavens.

In verse 5, Jesus is quoting Psalm 37:11. In verse 6, my study Bible suggests he is quoting or at least thinking of Isaiah 55:1-2, which has a strong flavor of wisdom teaching, which fits the context:

Ho, everyone who thirsts,
come to the waters;
and you that have no money,
come, buy and eat!
Come, buy wine and milk
without money and without price.
Why do you spend your money for that which is not bread,
and your labor for that which does not satisfy?
Listen carefully to me, and eat what is good,
and delight yourselves in rich food.
(Isaiah 55:1-2)

In this context, then, verse 11 poses the disciples with a choice – of where they want to be rewarded: here, with popular approval, or in the kingdom of the heavens, as prophets.

It may also pose that kind of choice to contemporary readers. 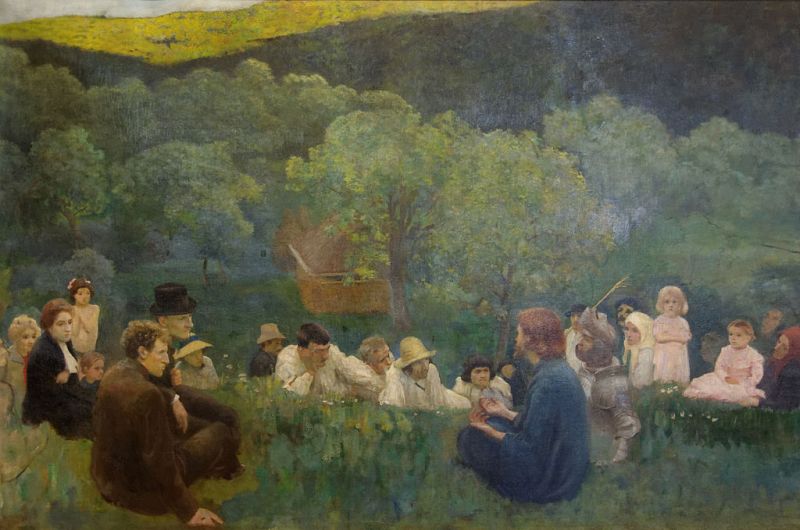