2 Peter is one of the prime candidates for being considered “canonical pseudepigrapha.”

Our class’s study of 2 Peter came hot on the heels of this contemporary instance of real life pseudepigraphy, which struck me as relevant to the problem:

That is, the date on the letter was November 11. In fact, many of the letters were distributed in church on November 10. I don’t think anyone thought of that as a lie. We are always trying to save postage.

As luck or misfortune would have it, I know something about how the letter came to assume its final form. It went like this: It began as boilerplate from the denomination. One of the committee members edited it, adding some congregation-specific details. Then another one of the members edited it, tweaking some wording. Then someone outside the committee edited it, tweaking some more wording and rearranging some of the points. Finally, an amenable Unitarian, with a lot of experience writing annual stewardship letters, and ruthless about redacting things down to one page [not me, obviously], worked on it and sent it back to the responsible committee members. That’s the version that ended up in the envelopes.

Not all of the members of the Committee whose names are on the letter actually saw the final version and signed off on it, although the individuals whose task it was to produce the letter did. [I suspect that if there’d been anything questionable or concerning about that final version, in the minds of the “responsibles,” that would have been different.]

It occurred to me that no one would think of this as plagiarism, despite the use of the denominational text – since the text is specifically provided to congregations for their use in this way.

Similarly, I doubt anyone would think of this as “forgery” or “lying,” even though several of the named signers of the letter had nothing to do with the production of the text, other than agreeing that the letter ought to be written. In this case, the names on the letter don’t signify authorship. They signify something, though. Maybe we would say “authority,” or “responsibility,” although around the congregation we would probably use language like “who’s handling that,” so maybe “agency” or “ownership” would be more precise.

The letter could just as well have gone out over a signature line that read “The Stewardship Committee.” That would have seemed a bit bureaucratic for our little congregation, though. The Committee line could almost just as well have been left off, and the signature line could just have listed the names of the committee members; most of the members of the congregation would have known from those names that it came from the Stewardship Committee. It’s pretty clear from the first line on that it’s not a “personal letter,” but a “church letter.” A specific one, for that matter: the annual stewardship letter.

All in all, this experience has made me think this: if we knew more about how that 2nd century church actually did things, we might be less perplexed by the “pseudepigrapha.” Maybe they did something like this, like what we do, routinely, thinking nothing of it, and not worrying much that a couple of thousand years from now people who don’t know any of us would doubt, completely correctly, if they still had this letter, and any of our emails to compare it to, whether the people whose names are on that letter actually wrote those words.

A couple of online resources on pseudepigrapha:

Guthrie, Donald. “The Development of the Idea of Canonical Pseudepigrapha in New Testament Criticism.” 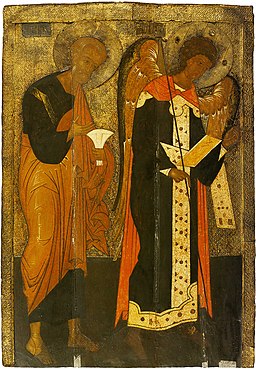