We are studying Amos 5:18-24 for Sunday, March 1 – the first Sunday in Lent, so this pointed repudiation of ritual worship unaccompanied by substantive change in one’s manner of living, this pointed insistence that justice and righteousness is the real worship, is timely. [Some questions on the text are here.] Here are a few notes on this text:

BACKGROUND AND CONTEXT:
The short book of Amos is a collection of short prophetic speeches attributed to the prophet Amos. He was active in the northern kingdom of Israel during the reign of Jeroboam II, so sometime between 786-746 BCE, with various sources pinpointing 760-755 or 750 BCE as the key period. We need to know that the kingdom of Israel at this time was enjoying political security and economic prosperity; people were getting rich and feeling good about it … as long as they were not the poor, who were being exploited, and who were being forced to sell themselves into slavery because of debt.

If we lived in Israel during the reign of Jeroboam II, and were doing well financially, we would probably feel we were blessed by God. Because, look at how well we’re doing. Amos is here to tell us we would be totally wrong about that. Far from being blessed, we are heaping up trouble for ourselves by our exploitation of the poor, our casual unconcern for their welfare, our corrupt commercial practices, our empty piety …

So different from now.

We know from history that the kingdom of Israel was conquered and incorporated into the Assyrian empire with the fall of the capital of Samaria in 722 BCE. We may want to go along with a couple thousand years of history of interpretation and read that historical event as a vindication of Amos’s prophesies of impending judgment.

It makes me wonder what would have happened if people in the 8th century BCE had listened to Amos. [I know we can’t know “how things would have turned out” in these historically counterfactual situations. But I wonder, anyway. This seems like part of Amos’s relevance to us in our own time and place. What would happen if we listened to Amos?]

This text is one of the lectionary readings for the 32nd Sunday in ordinary time in Year A. It’s also familiar to people as the source of Martin Luther King, Jr.’s reference to Amos 5:24, in his “I Have a Dream” speech, making it one of those Biblical texts that people recognize without necessarily knowing it’s from the Bible, or where.

What “the Day of the Lord” would have meant to Amos’s original audience is unclear. There’s a nice, brief discussion of this at the Jewish Virtual Library.

People must have looked forward to the “Day of the Lord” in Amos’s day – otherwise why say “woe” or “alas” for them in v18? There does not seem to be a place in the [Hebrew] Bible that explains this, and clearly, no fair using the NT book of Revelation. Although people today look forward to the Rapture. Maybe there is some parallel there.

The movement of verse 19 is presumably from bad to worse. I don’t know whether it is actually worse to meet a bear than a lion, but the idea seems to be that there will be no place of refuge. There will be nothing but fatality and disaster. That [presumably poisonous] snakebite will finish you off.

The word translated “gloom” is used only once, by Amos here, in the Bible.

Verses 21-23 list worship activities, that people may be taking as signs that they are on good terms with God, doing “what they are supposed to do.” They are pathetically, disastrously wrong.

The “rolling” of justice God wants is what people might do with big stones or with scrolls. This makes me think we ought to have something like a waterfall in mind.

Here’s one people in northern Israel might have been able to have in mind:

We probably need to think about the land of Israel to get the imagery of the “ever-flowing stream”.

I grew up in Southern California, which is a lot like the land of Israel in climate. Every so often we would drive past the Los Angeles River: a wide concrete-lined channel, completely dry. We also had “washes,” which were smaller concrete-lined channels that, again, were almost always dry – until we got a real rain, when they had water running in them for a while. The word translated “stream” in verse 24 is nachal; in Arabic, wadi. Most wadis, like washes, are almost always dry. When it rains, they flood.

Here’s one in the wilderness of Paran, in the Negev: 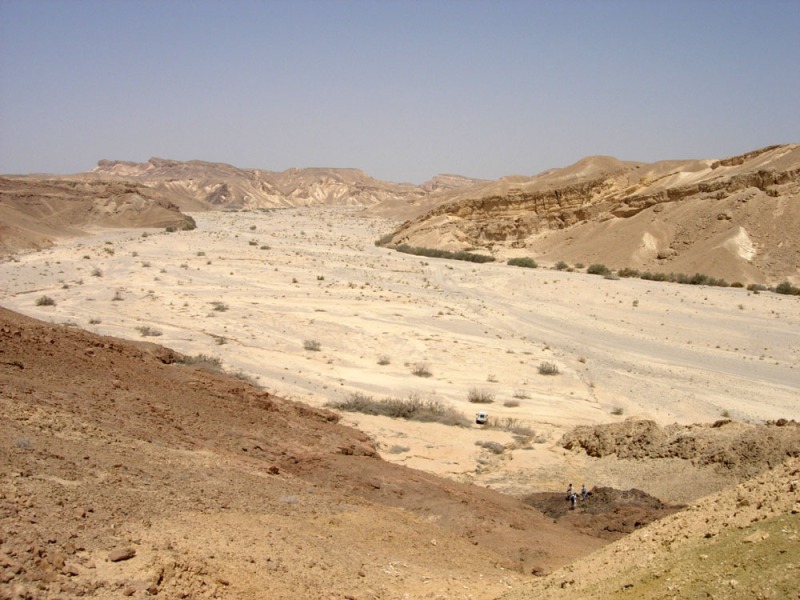 [Imagine how we’d be hungering and thirsting for justice/righteousness if this were our source for it, eh?]

Here’s the Nachal Ayun [see the waterfall above], in summer:

An “ever-flowing nachal”, then, would be like a real river, more like the Jordan, or the Nile, one that is full of water all year, in every season. Or maybe like powerfully rushing water in a flash-flooded nachal, only not just every so often, but relentless, never letting up.