We are studying portions of the book of Micah, Micah 3:1-2, 9-12, and 6:6-8, for Sunday, March 22. Even though we won’t be meeting in person, we can still spend time with the text and think about what it means for us. [One thing we might want to do would be to share comments here. Online sharing is not the same as class, but it’s sharing we can do from a pro-social distance. Some questions on the text are here.]

In the meantime, here are my notes on the text:

BACKGROUND AND CONTEXT: Micah is one of the short books of the “minor prophets.” Verse 1 introduces him as living in Moresheth, which commentators generally identify with Moresheth-Gath (Micah 1:14), a small town south-west of Jerusalem, in the last half of the 700s BCE. That would make him a contemporary of [first] Isaiah. He is a “southern kingdom” prophet, mostly with a prophetic message to the southern kingdom of Judah, although he has a message for the northern kingdom of Israel as well (see Micah 1:6-7). [Here’s a map.]

[Who did this and when? How we answer that question depends on whether we do or don’t believe that prophets can actually predict future events. The main evidence that some portions of the book of Micah are “later additions” is that they seem to refer to the exile and restoration, so some readers are inclined to think they were added after those events. That would mean they were added by someone other than Micah himself, maybe by a disciple or disciples. But maybe Micah had such good prophetic eyesight that he could see it coming from the 8th c BCE, and the book is the work of one author. Jeremiah 26:16-19 may support this reading.]

The prophetic warnings target predatory economic practices (see Micah 2:1-2, 2:8-9; even the poor were supposed to be secure in their land and homes; widows and orphans were supposed to be cared for; instead, the rich are getting richer and the poor poorer). And in chapter 3, another problem emerges: the corrupt leaders profit from this, instead of putting a stop to it.

[So different from today.]

This will not last forever. Chapters 4-5 are among the most beautiful messianic texts in the Bible. People will beat swords into plowshares and spears into pruning hooks and sit under their own vines and fig trees (Micah 4:3-4), and out of Bethlehem “not the least among the princes of Judah” will come a ruler who will stand and feed his flock like a shepherd and who shall be the one of peace (Micah 5:2-5). Matthew the Evangelist knew this (see Matthew 2:4-6).

Chapter 6 is another judgment text, organized as a trial in which God takes the people to court (before the mountains and hills), and presents the case against them. Micah laments his position as a witness to the disastrous moral situation at the beginning of chapter 7, and then speaks of ultimate redemption at the end of the chapter.

I see some creepy ambiguity in these verses. In English we read “you who hate the good and love evil” and then who do the other verbs. But in Hebrew the verbs are participles, so the verbs are a little more indefinite and accusatory: “hating good, loving evil, tearing/robbing the skin …” etc.

Usually we read these verses as referring to the wicked practices of the Judeans, which are metaphorically treated as cannibalism. But I wonder whether they can’t also be read as foreshadowing the even more predatory practices of the Babylonian conquerors. It seems to me it could be both, and that the Judean cannibals are eventually going to be food for the Babylonian ones.

[I think this especially in light of verse 4, “Then they will cry to YHWH”. This could be read as ‘when they – the victims – experience this, they will cry …’ But it’s horrible to think “they” would be the poor Judean victims of this treatment, since in v4 “they” will not be answered by YHWH because they have acted wickedly. It makes more sense to think the unanswered ones are the wicked cannibals. But then, when is “then”? Again – maybe when they are the ones in the pot. But that will only happen when the Babylonians arrive. On the other hand … maybe I’m reading under the influence of Habakkuk from the last two weeks.]

Either way, the verb “tearing” can also mean “robbing” or “plundering,” and “flesh” in v2 could also be translated as “kin.” Micah seems (to me) to be building in some double meanings or associations here, suggesting that this is cannibalism by the equivalent of theft, that results in taking family members away as debt slaves. [I could just be imagining things, but I don’t really believe that.]

It also seems not a complete coincidence to me that Micah’s pot/caldron image shows up again in Ezekiel (chapter 11), where the Judeans use the image of meat in a pot as an image of security, and God says, in effect, “think again.”

Let’s not skip over verses 5-8, which may still play on the cannibalism theme, since these prophets chant “Peace” while literally “biting with their teeth”, and they make war on those who put nothing into their mouths. Again, usually we read this as meaning that the prophets say nice things to people for money, and speak harshly to the poor, who do not feed (or pay) them; but notice that the poor presumably put nothing into their own mouths, either. Either way, the prophets are making war against the poor. This is exactly reverse of what they should be doing.

The consequence is that these prophets will be in complete darkness; they’ll know nothing. Micah, on the other hand (verse 8) will have power from YHWH and plenty to say.

He will say it in verses 9-12. When he says the rulers and chiefs “abhor justice” it’s like saying they treat justice as something unclean; the word “abhor” is related to the word we translate as “abomination,” and it has ritual connotations, as of unacceptable sacrifices. Like hating good and loving evil, this amounts to getting things exactly backwards. Perverting all equity, literally “twisting” or “making crooked” what is “straight, upright, right” is also about getting moral things backwards, reversing values.

This is happening because the leaders – rulers, priests, prophets – only care about money. (v11)

And yet, they are confident that YHWH is on their side. Do they think they’re pious? They certainly think they have God’s guarantee, and maybe God’s blessing. They invoke God’s name and God’s presence. There’s a chance this tells us they take their prosperity itself as confirmation that “YHWH is with us.” [If so, imagine what they think about the poor.]

Verse 12 – disaster – leads right in to verse 4:1 with the repetition of the phrase “the mountain of the house (temple)”. This makes the shift to the promises in chapter 4 really dramatic.

We are likely familiar with Micah 6:6-8. Two comments:

There’s a strategic use of gender in these verses, I think. The verbs in verses 6-7 are all in first person, gender-neutral forms; but that little phrase at the end of v7, that is translated everywhere “the fruit of my body,” would I think be translated anywhere else as “the fruit of my womb” or “the fruit of my belly.” The image is, surely, of a firstborn to which the speaker has given birth. This positions the speaker as a mother. [And don’t we feel sympathetic to mothers? Especially one who’s so desperate that she’s willing to sacrifice her firstborn?]

So when the prophet answers, in v8, with “He has told you (masculine singular), O mortal (adam), what is good …”, it has something of the rhetorical force of “cut the crap, mister, and man up.”

And then there’s “to do justice, to love kindness, and to walk humbly with your God.” It feels so much bigger in Hebrew. Literally, to do in the sense of to make, to accomplish, to bring about justice; to love chesed, that is, to love steadfast love, lovingkindness, loyalty, THAT kind of kindness; and [clunkily] “to be humble to walk” with your God.

No doubt “humbly to walk” is better English, and even better Hebrew. But to me it feels different to think of that humility as a verb, as something we would actively do and be, which then, in a way, makes possible that walking with God, or makes walking with God something we can see that we need to do, or want to do, or are content to do. To be humble enough to walk; to walk with; to walk with God. 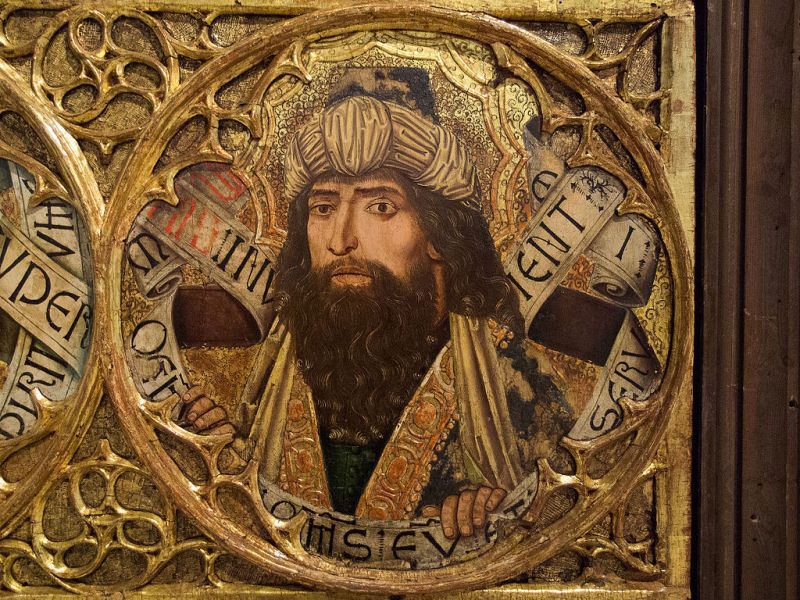