At this point in my life, I am guaranteed to fall into that well of loss at some point during “the Christmas season.” At more than one point, for that matter – I’ve known for a long time now that the boxes we bring up from the basement all hide one wormhole or another. I’ve already had a cry over the book with the oranges [see below].

But I hadn’t thought I needed to watch out for online shopping. As if finding that store Dad used to order those trays of dried fruit from every Christmas online, and then getting one of them for my brother because of course he really ought to have another one, would be just like any other almost-too-late gift purchase.

Silly me. I know that isn’t how “meaning” works … 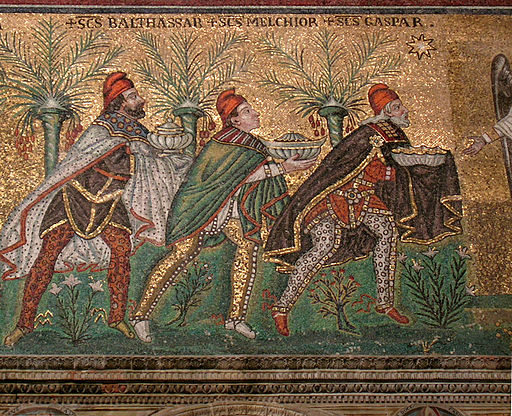 Traditional 3 Kings, with a view of date palms, which produce dates, which are sometimes considered a rare ingredient.

I grated orange zest the other day.

Grating orange zest made me notice that baking has something in common with magic.

Orange zest is not a particularly rare ingredient, at least not in the 21st century United States. Thank you, Florida and California! I noticed this as I pondered what to do with the extra ¾ teaspoon or so of orange zest that had come from the second orange, which I had grated because the zest from one orange was not quite enough for the recipe for the orange-date bars I was baking. I had, happily, bought two oranges in anticipation of this very possibility, not knowing off the top of my head how many oranges it takes to produce 1 ½ teaspoons of orange zest.

It’s not a rare ingredient…